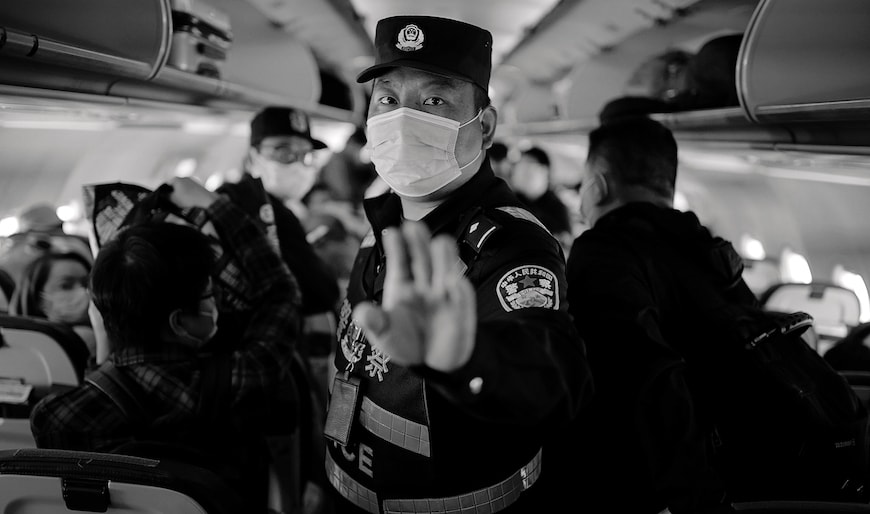 A police officer orders Reuters journalists off the plane without explanation while it is parked on the tarmac at Urumqi airport, Xinjiang Uyghur Autonomous Region, China, 5 May 2021. Photo credit: REUTERS/Thomas Peter

Compelling analysis of data in GxR21 shows that two thirds of all countries imposed restrictions on media in relation to the pandemic.

Following the downward trend from 2019, the global scores for Freedom of Expression and the Right to Information reached its lowest point since 2010.

Quinn McKew, Executive Director of ARTICLE 19, has described the decline in clear terms:

“The global pandemic has brought the world to a tipping point where governments and private actors face a stark choice. They must either commit to building a world based on rights to expression and information or they must become bystanders to the rapid decline in the freedoms that sustain robust and engaged societies.”

Find out more about the GxR

Unlike any other year in recent history, 2020 drove home just how vital access to accurate, reliable and timely information is during a global health crisis. It made it clear that freedom of expression is the fundamental human right enabling us all to demand the highest attainable standard of health.

When faced with such crises, governments have a fundamental duty to be transparent about their decisions, and a legal obligation to protect people’s lives.

And yet the GxR21 reveals that, rather than focusing on controlling the virus, protecting public health and improving access to information, governments used the pandemic as an excuse to:

And by presenting a false choice between human rights and public health, governments shut down public discussion and any scrutiny of their decisions.

In other words, they wasted public money and valuable time using the pandemic to entrench their power.

It has been well documented that the pandemic exposed and deepened cracks in our systems of government. However, the GxR21 demonstrates exactly how widespread the impact has been.

We have seen deployment of security forces and violent police tactics, as well as the deliberate spread of disinformation online and the weak efforts by legislators to respond to the problem.

Increased surveillance also posed a threat as millions were asked to download apps that collected data without adequate privacy and data protection assurances.

All over the world during 2020 public participation was dismantled: decisions were made without consultation, oversight was undermined, powers were centralised, and accountability limited.

“Populist leaders and those who seek to entrench their own power, hate accountability:”, continued McKew.  “Freedom of expression is often the first port of call for autocrats looking to erode democracy, and it must become the means by which we reverse this downward trend.

“As the pandemic recedes, we will not only need to rigorously roll back all the restrictions that have been placed on us and our rights, and roundly reject the surveillance imposed on us during 2020, but also heal the cracks which existed long before.

“That means addressing those failures of economic and political systems that have allowed single individuals to take control of resources and institutions, and which have left many by the wayside in terms of economic opportunity and political inclusion.

“In rebuilding our relationships with government, media, academia, and the arts, we must demand our rights to know and our rights to speak – online, on the streets, wherever we feel we need to do so.  And we must be heard. “

— The starkest deterioration in the GxR scores came from data looking at freedom of assembly and public participation in decision-making.

— Protests continued and were influential but government responses to them became ever-more brutal and repressive, often using them as an excuse to implement broader crackdowns on opposition.For example, Belarus and Thailand have seen huge drops in GxR scores after protest movements in 2020 were met with repressive state responses both on the streets and in the legislature and courts.

— In 2020, 62 journalists were killed and record numbers were imprisoned (274 imprisonments). Journalists, bloggers, and whistleblowers were arrested – often arbitrarily -, detained and prosecuted for criticising governments’ responses to COVID-19. China, Turkey, and Egypt were the biggest jailers.

— Of 620 violations of press freedom recorded globally in the first 14 months of the pandemic, 34% were physical and verbal attacks on journalists; 34% were arrests of journalists, or charges filed against journalists and media organisations by governments; and a further 14% were government-imposed restrictions on access to information. Arrests quadrupled from March to May 2020, and harassment and physical attacks rose across the world – from Brazil to Italy, Kenya, Senegal, and Nigeria.

— Whistleblowers were inadequately protected – and, in many cases, even silenced by governments themselves. Most of this violence and harassment happened in a context of total impunity. Most murders of journalists do not even reach the headlines in international media. Even those that do, such as Jamal Khashoggi (UN investigators into Khashoggi’s case faced death threats), Jan Kuciak and Daphne Caruana Galizia do not get justice – even though  high-level government officials were implicated in their deaths.

— In 2020, three-quarters of women journalists experienced online abuse and harassment. HRDs are also under attack. At least 331 were killed in 2020, 69% of whom were working on indigenous people’s or land rights.

— The majority of killings of HRDs took place in Latin America;Colombia alone accounted for 53% of murders of HRDs globally.

— Two-thirds of the world’s population – 4.9 billion people – are living in countries that are highly restricted or experiencing a free expression crisis, more than at any time in the last decade.

— Seven countries – with a combined population of 72 million people – saw a significant decline in their overall environment for freedom of expression in 2020;many more countries are in decline than are in advance.

— In Asia and the Pacific, 85% of the population lives in countries where free expression is in crisis or highly restricted – a 39% rise since 2010.
In the Americas, the regional global score for freedom of expression is at its lowest in a decade.

— Not a single country in Africa has a good GxR score, meaning more people are living in countries where free expression is in crisis or highly restricted than have been in the last decade.

In Europe and Central Asia, 34% of the population live in countries where free expression is in crisis.

In the Middle East and North Africa, 72% of the population lives in countries in crisis.

All media enquiries to [email protected]

https://www.article19.org/careers/ ARTICLE 19’s Team Digital is looking for one to two new fellows to join the 2021-2022 cohort of the Internet of Rights (IoR) Fellowship. This is a 12-month fellowship, beginning in April 2021. About the IoR Fellowship:The general goals of the IoR Fellowship are:• To protect and promote freedom of expression, freedom of association, […]